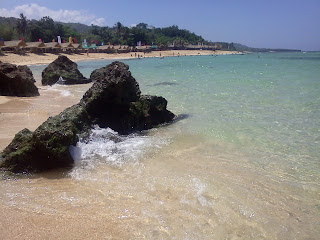 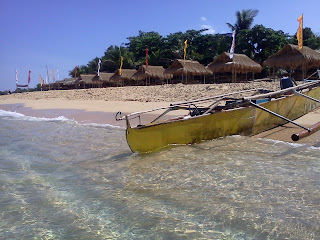 The Plan
It all started with an impulsive idea a few days before holy week.  I decided we were going on a backpacking adventure to Bolinao with the kids after an acquaintance mentioned she was from that province and that it wasn’t  difficult  nor costly to go there.   So we packed our bags, threw caution to the wind, and left two days after the idea entered my head. I figured how difficult could it be, since we traveled often to Baguio along the same route and which is even farther.  So I had it all planned out to travel at midnight, get some zzzzs in the bus and arrive there by early dawn and start the day in the beach.  Spend a few days, enjoying the water and sand, reading a book, writing a bit, take some nice shots, spend some quality bonding time with the kids. That was the plan in my mind. 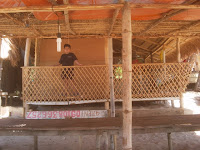 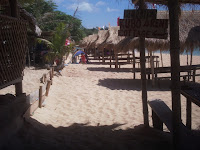 The Reality
Now here is what actually happened. So we packed our bags, hailed a taxi to bring us to the 5-Star bus station an hour before the midnight trip so we don’t have to rush.  When we got there, the bus --- the final trip for the day---was already full and was about to leave.  The next trip was at 5am the next day.  So we took the trip sitting by the aisle in plastic chairs for the next 3 hours, trying to focus on the movie being shown instead of whining and grumbling.  There was a kind man who gave up his seat for the younger kids  with us.  At least that cheered me up a bit.  And three hours wasn’t too bad or long a wait.  When we got to Pangasinan, people started getting off.  So we were able to transfer to better seats at least an hour before reaching our destination. 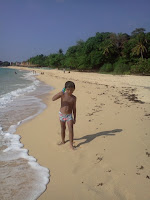 When we reached Bolinao, the farthest of  part of Pangasinan,  at 4am we waited at the bus station for our contact to arrive. I discovered that the Victory bus station and 5-Star bus station were almost beside each other, so either bus service could be used for Bolinao, Pangasinan destination.  Two hours have passed and she wasn’t around yet so we decided to continue without her. It wasn’t mind-boggling to get around as there was a  huge map in the bus station that indicated resorts, their locations and contact numbers if you want to ask about rental rates. Thanks to the friendly canteen owner in the bus station who recommended we go to Cabrera Cottages  18 km away, we were able to decide where to go and how to get there. She helped us hire a tricycle for P200 to bring us to Patar.

It was a refreshing morning as we took the trike trip. Upon seeing the beach, my mood got better. So we settled in a cottage fronting the beach for the next two days. The bamboo cottage offered minimal comforts with a mattress, a light bulb, and a fan which barely reached everyone.  That was tolerable. But what was a negative was the common bathroom area that was somewhat clean but you would prefer to rush out as soon as you are done. And the late night sing-alongs at full volumes  that went on  through the night.  I don’t know how we managed to sleep eventually. 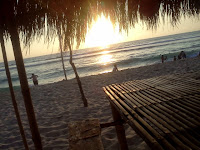 The Good and the not so Good
The mornings made up for the warm nights as the breeze and the water were cool and refreshing to the skin.  The view was uplifting and the rhythmic waves were soothing to the mind and soul.  The soft sand and clear waters in the day made up for the not-too-comfortable nights.  I would walk and sit around the beach at night for an hour or so by myself,   saying a short prayer and appreciating the sight of the star-filled night sky along with the music of the waves before I went to sleep. 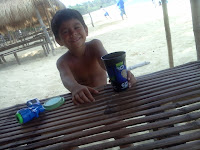 My kids easily made friends with the other vacationers. Our friendly cook named Nandy served us specially cooked dishes of rice and veggies for lunch and dinner and hot water for our cocoa and my coffee 3-in-1 packs for the morning.  It was a budget trip so I passed the market to get some supplies before we headed for the beach which was quite a distance from the town.  We came at the right time because  when we were about to leave, two days after, which was a Maundy Thursday, the crowd started coming in.  The empty space was filled with parked cars and the place was buzzing with people by the afternoon. Some people could not be accommodated anymore. 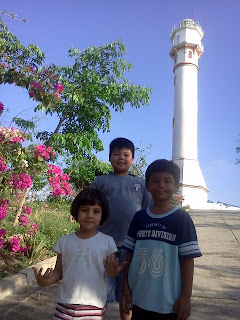 People were kind and considerate, unbelievably trusting compared to the attitudes in Manila, when it comes to cash.  I made the mistake of assuming that there would be easy access to ATMs  should I need more money.  Horrors, there was only one bank in town that had an ATM where I could get cash from after 5pm and it was not working.  The next one was an hour’s bus trip away at Alaminos, the more popular area because of  the Hundred Islands tourist site.  So my mind was racing: . . .what are my options now?  At first, I  intended to wait  for the only ATM in the area to go online for as long as it took.   When it was not yet working after over an hour, I made a deal with the bus conductor. I asked if he could advance me some cash until we reach Alaminos on our way home where I can get cash from an ATM to pay him back.  To cut the long story short, I was able to pay my dues to the trike driver, my cook, and the bus fare due to the kindness, trust and patience of the people of Bolinao.  So aside from the beautiful beach, it was the warm welcome of the people that made me decide to come back more often in the future.  Now I know how to prepare for the next visit.