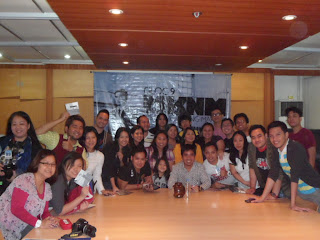 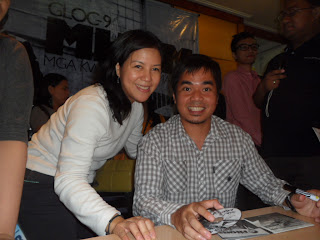 I'm not a fan of rap but Gloc 9's easy listening album caught my attention. His album called MKNM: Mga Kuwento ng Makata under Universal Records is something you can share with the whole world even if the language is tagalog because of the great melody.  And aside from that, his music is  not the stressful kind like most rap music I hear that have a lot of rants and cusses.  Those, along with lousy messages that encourage sex and drugs,  bad imagery , turned me off  from the genre.  Rap just gives me a headache, particularly gangster raps.

But hearing people say positive comments about Gloc 9 and his music, including fellow song artists who mention his name when asked about future collaborations,  I just had to meet this person and hear what he has to say.  True to form, he was a shy, humble person who was candid about where he gets his inspiration for the songs.  You can tell he has a soft spot in his heart for the underdogs of the country, like the gays and domestic helpers, because he highlights their plight or situations through his songs.  Luckily, the songs are nice to listen to so the messages will be communicated to a larger group of music lovers.

One of the songs in his album, entitled Sirena, was an instant hit for me.  The song describes the sufferings that a gay person endures from childhood until adulthood, starting with his father. This hurts more than what society thinks of him.  The great imagery, topped with a catchy tune, just makes this song special.

“I think this is the first time that a song about a gay man is presented in a first person’s point of view,” explains Gloc-9. “I worked hard on this song to make sure it doesn’t offend anyone.”

Because I liked one song, I had to hear the rest of the album.  I was pleased to hear that there was more than one great song like Inday , Alalay ng Hari, Bakit hindi, and Thankful to name a few.

Apparently, we were told that Gloc-9 seems to have the Midas touch, or rather the Platinum touch, as the songs of artists collaborating with him turn into hits,  leading  to  good  sales results for their albums.

When asked about the future of his music and exploring other Filipino dialects instead of only tagalog, he said he was open to explore such possibilities and will continue to make music in rap until people stop asking for more.