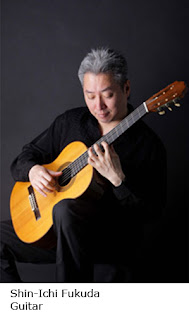 International concert guitarist Shin-Ichi Fukuda will give a rare performance at the BDO Francisco Santiago Hall, Makati Avenue, on Saturday, January 26, 2013 at 8 PM. The concert is presented by Guitar Friends and Yuichi Imai, together with BDO, Makati Shangri-La Manila and Philippine Airlines. The concert is free of charge and open to the public on a first-come-first-served basis.

Born in Osaka, Japan on December 25, 1955, Fukuda began studying the classical guitar at the age of 12 under Maestro Tatsuya Saitoh (1942-2006). He left Japan to study the guitar at L’Ecole Normale de Musique de Paris under maestro Alberto Ponce, graduating in 1978 with the premier prix and a performer’s diploma. He continued his studies at the Accademia Musicale Chigiana in Siena, Italy, with maestro Oscar Ghiglia, graduating in 1980 with the highest-honour diploma.

Fukuda is an international award-winning concert guitarist who has won many important prizes.  In 1981 he found fame, winning first prize in the prestigious 23rd Paris International Guitar Competition organized by Radio France, the highest honor prize in the Classical Guitar world. He has performed extensively in and outside Japan, in many guitar recitals in the USA, France, Italy, Spain, Argentina, Brazil, Czech Republic, Hungary, Bulgaria, Greece, Israel, Mexico, Finland, China, Uruguay, Colombia, Taiwan, Korea, Cuba, and Singapore. Renowned composers have dedicated major works to Fukuda, one of whom is Leo Brouwer, who wrote HIKA (1996) and Concerto de Requiem (2005) for him. Now recognized as the top Asian classical guitarist, he has released more than 60 CD, LD, DVD & video albums since 1984.

A highly gifted teacher, he has trained many pupils who have since then gained the highest honors in classical guitar such as Japanese guitarists, Akiko Saito, Kaori Muraji, Daisuke Suzuki, Yasuji Ohagi.

Fukuda will give a guitar masterclass on Sunday, January 27 at the Pasay Function Room of the Makat Shagril-La Hotel at 9 AM.  Like the concert, the masterclass is free of charge and open to the public on a first-come-first-served basis.
Posted by JR B at 10:35 PM