Karagatan, gongs and bamboo music: A Rare Ocean of Experience 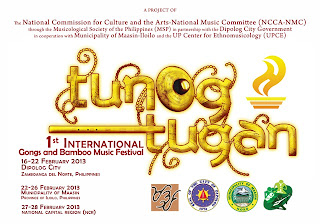 Listening to gongs and bamboo music like an orchestra is an experience like no other. I was told.  Now, Manila residents have a chance to experience what they are talking about in Feb 27-28.  Read on to get a feel of what to expect . . .
Press Release:
On February 21, 2013, one hundred fifty traditional Asian musicians of gongs and bamboo music will play as one to interpret Karagatan , an innovative composition by Italian-based composer Yuval Avital, as a closing piece for the Tunogtugan Festival, the First International Gongs and Bamboo Festival which takes place from February 16 to 22 in Dipolog City, February 22 to 26 in Maasin, Iloilo and February 27 to 28 in Metro Manila, Philippines. 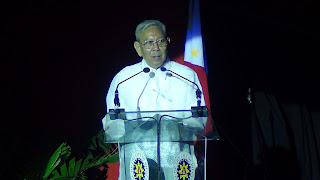 Karagatan (Filipino term for ocean) is a rare musical experience, bringing together modern and traditional as well as disciplined and freestyle expressions.

Festival Director and noted Filipino Composer and ethnomusicologist , Dr. Ramon P. Santos explains that gongs are not tempered like western instruments. There are no standards and music is not measured. This is in contrast to western instruments that follow notation and have specific pitches and tones. These elements of traditional and theoretical techniques pose as one of the major challenges that Avital hopes to overcome during the world premiere of Karagatan.

Karagatan will be a 40-minute contemporary piece interpreted through indigenous instruments. It is written in one movement, composed of various episodes with flexible timing and may be performed longer or shorter according to the conductor's preference. It will feature four soloists and will be led by two of the Philippines' leading conductors namely Chino Toledo and Dr. Ramon P. Santos. 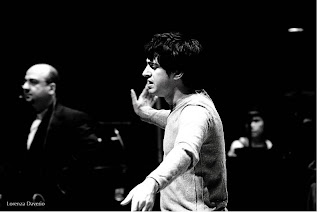 Yuval Avital is considered as a leading visionary figure in the contemporary music scene in Europe. His works are characterized by massive sonic compositions . Avital is no stranger to the Philippines for he has been here twice as participant of two major international rondalla festivals. He dedicates Karagatan to the Bopha victims of Mindanao, Philippines. Bopha will be remembered as the tropical cyclone that caused so much death and destruction to the people of this region.

“I dedicate this composition to the memory of the men, women and children lost in this great tragedy, and to the spirit of the Filipino people, which will always find strength to overcome difficulty with hope, courage and great humanity,” says Avital.

Karagatan forms part of the performances at the Tunogtugan Festival, which aside from concerts will explore the different theoretical and social issues that are related to the musics of gongs and bamboo. The festival will provide a venue for artists to interact and share their musical traditions and research works , and come-up with materials on gongs and bamboo music for schools and educational institutions through conference and workshops.

Tunogtugan Festival is a project of The National Commission for Culture and the Arts- National Music Committee (NCCA-NMC) through the Musicological Society of the Philippines (MSP) in partnership with the Dipolog City Government in cooperation with Municipality of Maasin-Iloilo and the UP Center for Ethnomusicology (UPCE).