Chefs on Parade 2013, A Vision of Culinary Love, Wraps Up with a Grand Burp! 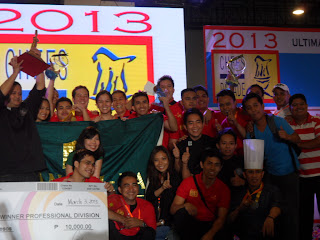 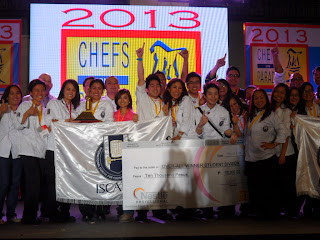 Organizer Hotel and Restaurant Association of the Philippines (HRAP) confirmed that with 286 trade exhibit booths, over 120 food experts and guest chefs in attendance, and 481 students and 261 professionals as contestants, COP 2013 is definitely the grandest that HRAP has organized since 1974.

The biggest winners of the competitions were the International School for Culinary Arts and Hotel Management (ISCAHM) and Makati Shangri-La Hotel who cinched the Presidential Trophies in the student division and professional division, respectively. Team Thailand from Dusit Thani College won the Asian Market Basket competition.

Overall Chairman Philippe Bartholomi declared, “COP 2013 was a resounding success… Everyone from the trade and other organizers has recognized COP as the leading hospitality show in the Philippines.”

“Our biggest achievements this year were getting the interest and involvement of everyone in the industry, seeing so many happy people meeting their favorite celebrity chefs, and knowing that so many culinarians gained further knowledge through interaction in the competition and workshops,” Bartholomi continued.
There were 28 cooking demonstrations and 26 workshops. The topics of the demos ranged from local and international cuisine to special ingredients. Demo presenters included luminaries such as Boy Logro of GMA 7’s “Kusina Master” and Emmanuel Stroobant of the Asian Food Channel’s “36 Ways to Live.” Workshops by local and international food experts covered subjects on food preparation, service and business.

There was also a Great Adobo Challenge exhibition match sponsored by the Department of Tourism and the Tourism Promotions Board wherein expat chefs whipped up their version of the Philippines’ most famous dish.
Another special feature at COP 2013 was the Organic Food Avenue wherein several local producers were able to present and sell their products.
Chef Emmanuel, a second-time guest at COP, thanked the Organizing Committee for inviting him again and paid tribute to Chairman Bartholomi and his hard-working team. Chef Emmanuel said, “It is such a pleasure to be with you guys. You are putting a lot of work with passion.”

Restaurateur/Filipino cuisine promoter and past HRAP president Glenda Barretto, who was honored with a Larry J. Cruz award, said that she is proud of how Chefs on Parade has grown. She declared, “To the Organizing Committee, you did a good job. I congratulate you for your success.”

Brother Victor Franco, FSC, President of De La Salle-College of Saint Benilde praised the COP for developing young culinarians. He said, “This activity brings together young people with their mentors, their idols, their inspirations. The healthy competition brings out the best in young people.”

At the closing ceremonies, HRAP President Eugene Yap thanked the sponsors, partners, guests and supporters who helped make COP 2013 an event that exceeded their expectations. “We are eternally grateful to everyone,” said Mr. Yap. “But the work doesn’t really stop here. As soon as COP 2013 is finished, it’s time to think of the next one.”

Perhaps not many know that Chefs on Parade is put together by volunteers who make up the Organizing Committee. Love for the industry and a vision for the Philippines as a topnotch culinary destination motivate them to work tirelessly. As Chairman Bartholomi gladly said, “COP is really a gathering point for everyone in the industry… It has been an outstanding, enriching, inspiring, unique and exceptional experience. Here’s to the next Chefs on Parade in 2015!” 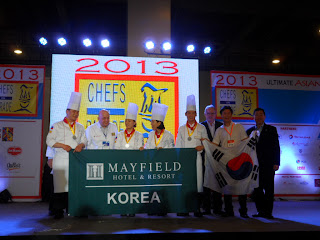 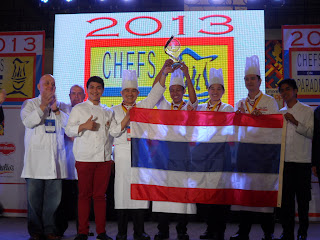 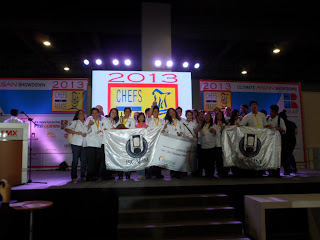 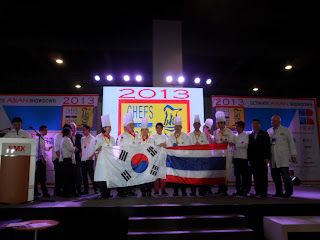 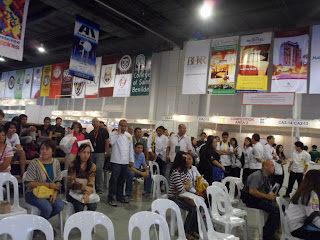 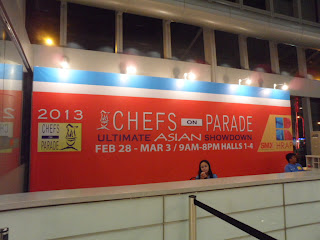 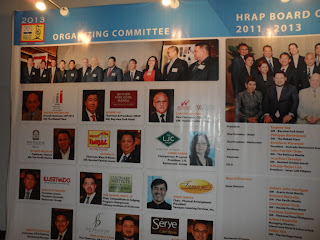 Email ThisBlogThis!Share to TwitterShare to FacebookShare to Pinterest
Labels: Chefs on Parade 2013, LJC Group of Restaurants 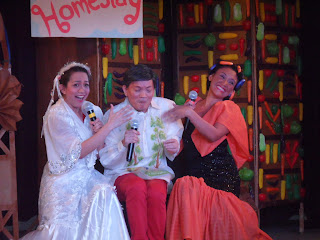 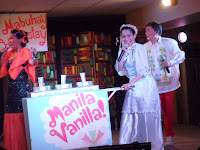 Foreigners will get a chance to understand Pinoy culture better when they watch the funny performance of Manila Vanilla at Mabuhay Restop located in Roxas Boulevard corner T,M, Kalaw Ave. 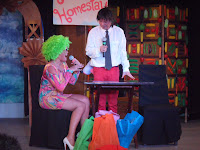 It is a widely known fact that Filipinos are very hospitable people, so much so that they greet guests not by asking, “Kumusta (How are you)?” but by asking, “Kumain ka na ba (Have you eaten)?”  Such quirks and other peculiar Filipino traits are celebrated in Mabuhay Restop’s Manilla Vanilla--a unique musical comedy directed by Nestor U. Torre, with music composed by Ryan Cayabyab. 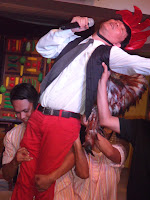 The show tells the story of a Filipino family as they prepare to open their home as a bed & breakfast. Served with deliciously self-deprecating humor and lighthearted song and dance numbers, the show will tickle your funny bones and serve as an enjoyable introduction to those new to Filipino culture.

Mabuhay Restop’s Manila Vanilla! stars Celine Fabie of the Ryan Cayabyab Singers and Spotlight Artist Centre's "Katy: The Musical," Astarte Abrahan of Resorts World Manila's "The Sound of Music" and Repertory Philippines' "A Portrait of the Artist as a Filipino"; singer and comedian Andy Bais; and entertainer and Gawad Kalinga volunteer Edward Fernandez. 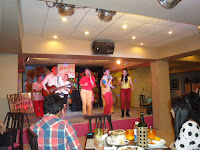 Aside from a night of pop-cultural entertainment, audiences will also get to enjoy a delicious Filipino buffet of home-style dishes and different regional specialties.

“At Mabuhay Restop, we want our guests to get to know and experience the Philippines like never before,” says owner and president Rose Cabrera, a UCLA-educated California lawyer and GK advocate. “We don’t just offer great food and entertainment; we also offer voluntourism tours and other avenues to provide visitors with an opportunity to create better lives for communities who need it most.”

What makes this show and venue even more worthwhile to patronize  is the purpose behind the effort . . .  A Catalyst of Nation-Building. 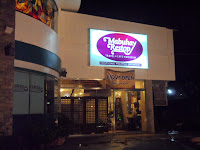 As a museum, travel café, and social enterprise in one, Mabuhay Restop is devoted to promoting Philippine culture and heritage in creative ways while making a difference. The social enterprise has committed to give 30% of Mabuhay Restop’s net income to Gawad Kalinga, a Filipino nation-building movement dedicated to eradicating poverty and restoring human dignity through building empowered and sustainable communities.

Ultimately, Mabuhay Restop aims to make a difference in the lives of Filipinos through social tourism and entrepreneurship. “We want to be able to set an example to other entrepreneurs by showing it is profitable to invest in the poor and partner with them through social enterprises.” 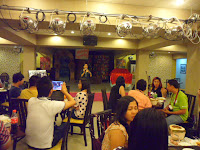 Other Attractions
To add to its repertoire of shows, Mabuhay Restop also offers something for the kids and kids-at-heart with Mga Kwento ni Tita Beauty, also written and directed by Nestor U. Torre. A spin-off from Mga Kwento ni Lola Basyang, the show features creative and theatrical storytelling featuring 6 original Filipino and English tales imbibed with valuable moral lessons. 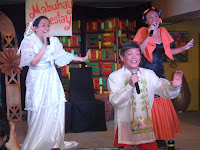 For a different Philippine travel experience, Mabuhay Restop offers the Voluntourism or Kalinga Tours. They provides visitors a totally different Philippine travel experience by taking them not just to beautiful tourist spots in Bicol, Bacolod, Palawan, and Davao, but also to several Gawad Kalinga villages, where they can experience the warmth and hospitality of the Filipinos, practice compassion in action, and understand the soul of bayanihan. 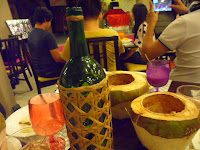 Additionally, Mabuhay Restop also offers the Bayan Tour, a 3-hour guided and interactive tour in Rizal Park for visitors who wish to learn more about the Philippines and the Filipino. This tour features the one-of-a kinds "I am Filipino" art exhibit with 12 Filipino artists like Ugu Bigyan, Nemi Miranda, Ramon Orlina, Ryan Cayabyab, JC Buendia and Ernie Francisco, and Albert Badz Magsumbol. 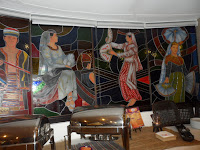