Mrs. Robinson, the Mother of all Cougars, Bares Onstage 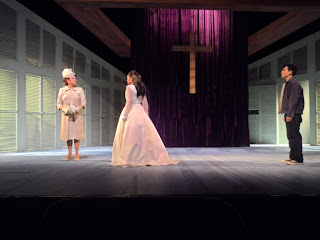 It’s true, Mrs. Robinson, bares it all for the young, more than half her age, neighbor’s son, Benjamin. You didn’t hear it from me, but this classic scandal is still going on at Repertory Philippines with their version of “The Graduate”. Now you can see it with your very own eyes at Onstage Greenbelt on April 26, 27 and 28.

This mature play is worthy of attention because of the dedication of these fine actors to their roles, going the difficult step of being vulnerable just to achieve the play’s objective and present a believable story.  The acapela background music, simplified stage, 60s make up and wardrobe takes you to that era of our parents and grandparents college days as you notice the similarity of conflicts and issues they had with the present day college students.  The universality and relevancy of the theme will cross over to future generations as well.  Perhaps what will distinguish this play from the movie version is the inclusion of a scene that presented Elaine’s reaction to the whole situation which was originally overlooked or ignored.  Her character was given more importance and thus the quiet voice was allowed to be heard and that hanging question was addressed.

Pinky Marquez played the pivotal character valiantly, while Reb Atadero played the confused, lost boy with as much fervor.  Sweet Cara Barredo was a shoe-in for the role of Elaine, while Jeremy Domingo portrayed a powerful, distraught father and husband.  Joel Trinidad’s characters served as comic relief to an otherwise very serious play.  Angela Padilla and Natalie Everett were true to their roles even if it meant baring all.  Aside from an entertaining performance, expect a lot of skins exposed as an added treat.

The Graduate, a hilarious, satirical look at middle-class disillusionment and social mores, was first presented to the public in 1963 as a novel by Charles Webb. Four years later, it was adapted as a screenplay by Buck Henry and Calder Willingham. Dustin Hoffman, Anne Bancroft, and Katharine Ross starred in the movie version of the Graduate (17th on the list of the American Film Institute’s Greatest Movies of All Time) which tells the story of Benjamin Braddock, a recent college graduate who, after being seduced by an older woman, Mrs. Robinson, finds himself falling hopelessly in love with her daughter Elaine. Selected in 1996 by the US National Film Institute as being “culturally, historically, and aesthetically significant,” the movie went on to become the 21st highest-grossing film in the US and Canada. It also featured the American Film Institute’s 6th most popular movie theme song in the history of American Cinema (“Mrs. Robinson” by Simon and Garfunkel), forever cementing the film in American popular culture.

In 2002, new life was breathed into the story when Terry Johnson adapted The Graduate for the stage. The theatrical production, which starred Kathleen Turner, Jason Biggs, and Alicia Silverstone, ran in London’s West End, on Broadway, and on tour all over the United States.

Now, Repertory Philippines finally brings The Graduate to Manila. Veteran director, playwright, and actor Jaime del Mundo (Shakespeare In Hollywood; The Lion, The Witch, & The Wardrobe; Little Mermaid) directs the play, adding his own unique touch of wit, charm, and edge to this well-loved comedy. Heading the cast is multi-talented theater icon Pinky Marquez (No Way To Treat A Lady; Katy: The Musical) as the iconic “cougar” Mrs. Robinson. Sharing the stage with her are versatile up-and-comers Reb Atadero (Altar Boyz; They’re Playing Our Song) as the hapless Benjamin Braddock and Cara Barredo (Little Women; Rivalry: The Musical) as the charming and innocent Elaine Robinson. Rounding out the cast are theater veterans Jeremy Domingo, Angela Padilla, Natalie Everett, Joel Trinidad, and show director Jaime del Mundo.

With a hilarious script, masterful direction, and brilliant performances led by Ms. Marquez, The Graduate is sure to seduce audiences all over again. 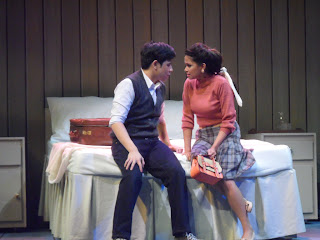 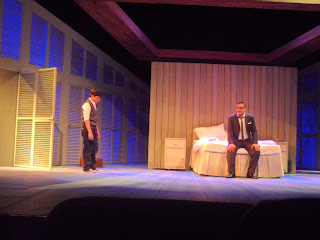 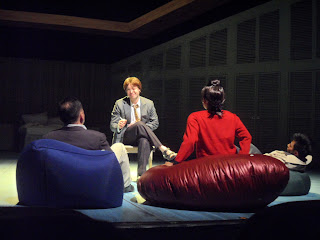 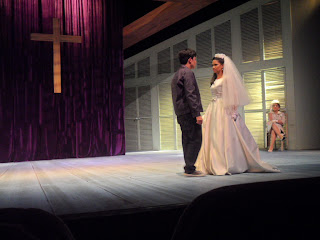 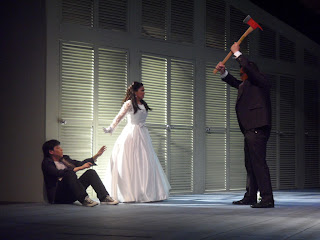 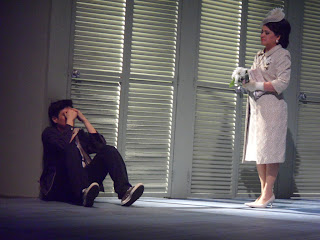 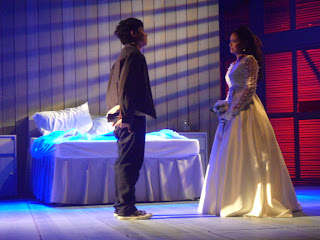 Posted by JR Bustamante at 5:20 PM