Fiery Flamenco Returns to the CCP in June 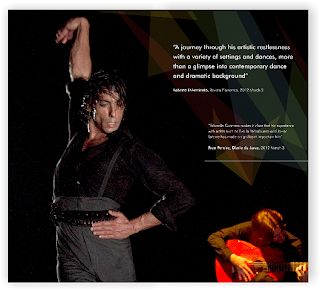 Spanish flamenco dancer and choreographer Eduardo Guerrero returns to Manila to perform De Dolores, a stunning flamenco concert which mesmerized Manila audiences last year.  Eduardo Guerrero’s De Dolores will be shown on June 14 and 15, 2013, 8pm at the Cultural Center of the Philippines’ Tanghalang Aurelio Tolentino (CCP Little Theater). The event is presented in collaboration with the Cultural Center of the Philippines, the Embassy of Spain, Instituto Cervantes de Manila and BENCH.

Guerrero took his first dance steps at the early age of six. He studied Spanish dance at the Conservatorio de Danza de Cádiz and later completed his contemporary and classical training with David Greenall and Monserrat Marin. He has worked with the biggest names in flamenco such as Eva Yerbabuena, Amador Rojas and Antonio Canales, among others. He has garnered several awards such as La Perla de Cádiz and the First prize in the II Choreographic Contest of Andalucia Professional Dance Conservatories.

Flamenco is rooted deeply in the cultures of Spain, though it is mostly centered in Andalusia, yet included in almost every social event in both European and Spanish countries. The Cultural Center of the Philippines has presented flamenco dance and music productions, among them, Spain's famed Flamenco dancer Sara Baras.