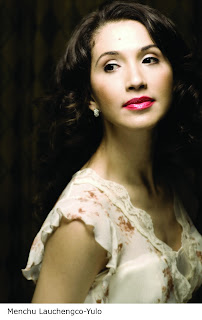 Theater actress Menchu Lauchengco-Yulo performs onstage as the third and last featured artist in the series Triple Threats: Leading Men and Women in the Philippines Musical Theater on August 15, 2013 at 7:30 pm at the Cultural Center of the Philippines’ Tanghalang Aurelio Tolentino (CCP Little Theater).

Entitled “Leading Lady”, this concert is also a celebration of Menchu’s 35th year as a theater actress. Musical director is Rony Fortich. Lighting design is by one of the country's most sought-after lighting designers for live events and theatrical productions, John Ilao Batalla. Stage director is Raymond Lauchengco.

Menchu began her career in 1978 with Repertory Philippines. She worked with other theater groups and production companies such as Trumpets, Atlantis Productions, Actor’s Actor Incorporated and New Voice Productions. Recently, Menchu played the role of Anna Leonowens in Resorts World Manila’s production of “The King and I”. She was also last seen the Atlantis Production of the musical “NINE”. Last year, Menchu did a three-week run in Singapore of the play “The God of Carnage” where she garnered an Aliw Awards nomination for Best Actress in a Play. Her most recent directional work, the musical “Jekyll and Hyde” opened to rave reviews.

Triple Threats: Leading Men and Women of Philippine Musical Theater is a series of solo concerts featuring the stalwarts of Philippine Musical Theater. Each concert is an intimate evening of beautiful music, personally selected by the artists themselves, from their vast repertoire of favorite songs from Broadway, West End, original Filipino musicals and the movies. Dubbed as a series of “concept concerts”, the narrative of the performance is dictated by the song choices, a rare opportunity for audiences to see a different facet of the acclaimed theater, television and film artist being featured. The definition of a “triple threat” is someone in a particular field who exhibits three skills that are necessary to excel.

Triple Threats: Leading Men and Women in the Philippine Musical Theater is presented by the Cultural Center of the Philippines. Subscriptions to the three concerts are available at P1,200 for orchestra sides. Individual concert tickets are P800 for orchestra center and P600 for the orchestra sides. Standard discounts are 50% for students, 20% for senior citizen, person with disabilities (PWDs) Military and government officials. All performances begin at 7:30 pm at the Tanghalang Aurelio Tolentino (CCP Little Theater).
Posted by JR B at 12:25 PM