VENTHRILLA In Manila: Ventriloquism and Puppetry Showdown at the CCP 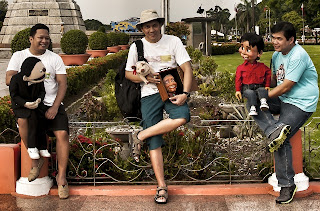 Press Release:
The three popular ventriloquists in the country -- Ony Carcamo, Wanlu, and Ruther Urquia -- perform together in "Venthrilla in Manila," at the Cultural Center of the Philippines (CCP) Tanghalang Huseng Batute on August 16 (7:30pm) and August 17 (3pm and 7:30pm), 2013.

The live puppet show features fun, and usually educational, ventriloquism segments using Manila's famous landmarks (Luneta, University Belt, Quiapo, Divisoria, etc.) as backdrops. Ony and his wooden boy pal Kulas talk about the adventures and misadventures of youngsters studying in Manila. Wanlu and his naughty Nicolo relive the old Escolta and Quiapo, once the business capitals of the country. Ruther and Lolo Teddy bring back the memories of how Luneta and Intramuros made indelible marks in our history.

Ony is an award-winning poet and author. He has performed in schools, comedy bars, corporate venues, and theaters, including the CCP Main Theater.

Wanlu won the hearts of our local televiewers when he became a hall of famer of the popular TV5 talent show "Talentadong Pinoy." A veteran kiddie party host and performer, he has represented the country in international puppetry festivals.

Ruther made his mark when he clinched the first "Pilipinas Got Talent" finals of ABS-CBN. A former youth pastor and a seasoned magician and church speaker, he has appeared in numerous television and radio shows that showcase his talents.

Email ThisBlogThis!Share to TwitterShare to FacebookShare to Pinterest
Labels: Cultural Center of the Philippines, puppetry, ventriloquism