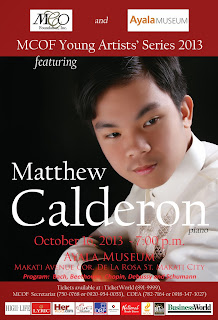 Press Release
Pianist Matthew Calderon will be performing at the Ayala Museum, Makati Ave. corner De la Rosa St., Makati on October 16, 2013 at 7pm under the aegis of the MCO Foundation's "Young Artists' Series".
Considered one of the most exciting young artists of this generation, Matthew Calderon started his first piano lessons at the early age of 6 under Mr. Jerome Baes.  In 2010, he was accepted as a music scholar at the Philippine High School for the Arts (PHSA) at 12 years old.  He is now on his 4th year and under the tutelage of Prof. Mary Anne Espina. Since his first year at PHSA, he has consistently garnered academic and artistic excellence awards.
In 2011, he won 4th prize in the PTGP’s 2011 “Soundscapes” competition.  Last year, he was the lone winner of the 2nd International Mozart Piano Competition held in Bangkok, Thailand. He joined with 11 other young talented pianists across Asia to participate in the 2013 Summer Piano Institute at the Yong Siew Toh Conservatory at Singapore where he had master classes with Prof. Thomas Hecht and Prof. Albert Tiu.
Aside from solo concerts, Matthew also engages himself with chamber music with other young musicians of his age, and regularly performs in school or outreach concert handled by National Arts Center of the Philippines in Los Baños and the Cultural Center of the Philippines.
Matthew regularly attends piano masterclasses including those handled by Claudia Yang, Fr. Manuel Maramba, OSB, Prof. Najib Ismail, Prof. Aries Caces, Dr. Ross Salvosa, Prof. Reynaldo Reyes, Dr. Victor Asuncion, Ms. Carmencita Sipin-Aspiras, Dr. Charisse Baldoria, Dr. Anna Kijanowska and Prof. Rolf Dieter Arens.
For this concert, Matthew will be performing works by Bach, Debussy, Schumann and Beethoven.  This concert is made possible through partnership with Ayala Museum, the National Commission for Culture and the Arts,  Lyric Piano, National Book Store, Sheaffer Fine Pens, BusinessWorld, HerWord, HighLife, Development Bank of the Philippines, and 98.7 DZFE.FM The Master's Touch.
The "MCOF Young Artists' Series" is one of Manila Chamber Orchestra Foundation’s core programs.  The MCOF, established in 1985, has a mission of promoting classical music. Every year, the MCO Foundation selects some of the most promising young artists, who are given the endorsement, performance opportunities, and exposure to a wider public. Oftentimes, the recitals of young artists under the MCOF aegis have become the artists’ official debut as performers. The MCOF has featured numerous young talents who are doing well now in their respective careers.