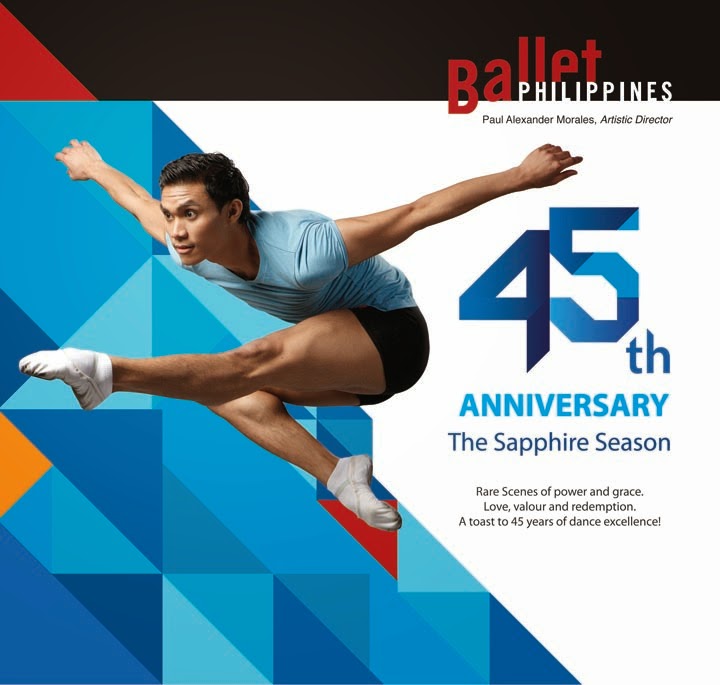 Press Update:
Ballet Philippines, the country’s premier classical and contemporary dance company proudly announces its 45th Anniversary – The Sapphire Season as it celebrates 45 years of sharing the gift of dance.

The exciting line-up of productions is as follows:

Hailed by critics as “poignant and powerful,” Agnes Locsin’s modern dance masterpiece returns to celebrate the 150th birth anniversary of its lead character - Apolinario Mabini, the paraplegic, ‘brains of the Katipunan’.

Winner of Outstanding Dance Production and Outstanding Choreography for Agnes Locsin at the 2008 Gawad Buhay! Awards

This two-week celebration and fundraising series features 3 programs in a festival celebrating the company and its works.

Hailed as “the show that brought sexy back to ballet”, this sublime re-staging by premier danseur Nonoy Froilan returns in this special repeat performance of the show.

Ballet Philippines shares the stage with the companies, dance schools and artists who have sprung from its rich tradition of excellence.

The season ends with the return of the legendary dance rock musical MANHID, co-presented by Tanghalang Pilipino. Set in an alternate present day Philippines where the EDSA revolution failed, this musical features heroes and villains with superpowers, and a people sick with Kamanhiran (Apathy).  Celebrating a nation of heroes on the 29th Anniversary of EDSA revolution, MANHID promises to be a must-watch event for 2015.

Founded in 1969 by Alice Reyes with the support of Eddie Elejar and the Cultural Center of the Philippines, Ballet Philippines is the country’s premier dance company and is known worldwide for its repertoire of classical and modern pieces. Its school, the CCP Dance School, continues to produce dancers of international caliber.

Ballet Philippines - The 45th Anniversary Sapphire Season. Rare scenes of power and grace. Love, valour and redemption. A toast to 45 years of dance excellence!
Posted by JR Bustamante at 3:34 PM