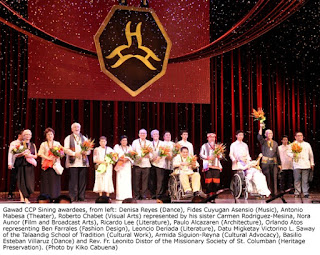 The Gawad CCP Para sa Sining, which is given every three years, is awarded to artists or groups of artists who have consistently produced outstanding works, enriched the development of their art form. The award is also given to cultural workers, who through their works in research, curatorship and administration, have helped to develop and enrich Philippine art. The Tanging Parangal is given to individuals or organizations to honor their outstanding contributions to the development of the arts in the country. (Photos by Kiko Cabuena)
Posted by JR B at 1:51 PM No comments: 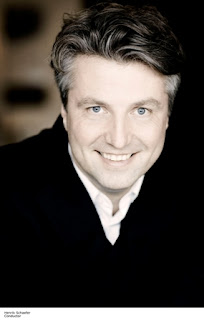 Henrik Schaefer’s conducting career began with a ballet production of the Rite of Spring with the Leipzig Ballet and the Gewandhausorchester Leipzig. Since then, he has become a sought-after Wagner conductor, and his repertoire includes all the great Mozart operas as well as the romantic Italian and French operas. He has appeared as guest conductor at the operas in Leipzig, Rouen, Chemnitz, Seoul, the Opera Hedeland, the Norrlands Opera, the Hongkong Opera and the Opera of Gothenburg. 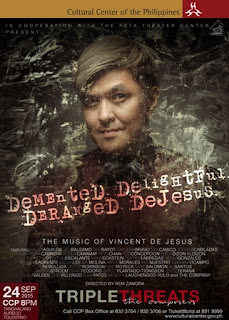 Billed as “Demented. Delightful. Deranged. De Jesus.”, the event is an intimate concert featuring the dark, melancholic and whimsical music of Vincent De Jesus. Highlights of the show are songs from his 32-year career in theater, television and film to be performed by some of today's finest theater actors/singers.

Critics rave Vincent De Jesus for his music and lyrics which “paint the poetry of passion and the prose of persistence, carve the pangs of unreciprocated pining, engrave the dangers of desire for power, and sanctify ordinary lives,” for “churning out world-class material” wherein “a long-running original Pilipino musical would no longer be the stuff of fantasy.” Others praise his every lyric which has an emotional resonance that affects, moves, making the heart remember personal experiences, and his music which “is something that music majors would want to write a thesis someday.”

Triple Threats: The Composers is presented by the Cultural Center of the Philippines. Individual concert tickets are Php1200, Php1000 and Php800. 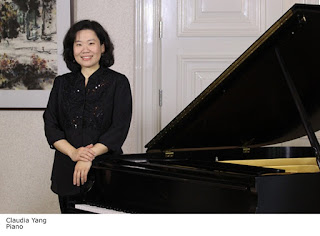 Claudia Yang began her piano studies at the age of five under Mrs. Norman Tan in Malaysia and already at six gave her first concert performance. In 1991, she arrived in Vienna to study under Dianko Iliew and in the following year, she was invited to perform at the “Salzburg International Music Festival for Young Pianists”.

In 2010, Claudia made her tour in Europe and Asia giving recitals celebrating Chopin’s 200th Birth Anniversary. Since 2011, Claudia is also sitting as a jury member at the International Chopin Competition for Young Pianists in Moscow.  Claudia is awarded “Pro Cultura Hungarica” by Hungarian Government for her contribution in promoting Hungarian Cultural especially music by Ferenc Liszt. The award was presented by Hungarian Prime Minister Orban Viktor during his official visit to China in February 2014.

The Philippine Philharmonic Orchestra (PPO) is the country’s leading orchestra and is widely regarded as one of the top musical ensembles in the Asia-Pacific region.