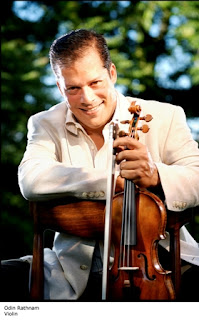 Odin Rathnam last performed with the PPO when Ochanine invited him to present the Brahms Violin Concerto.  At the age of 15, Odin Rathnam himself performed as a soloist at Carnegie Recital Hall. He performed at many major European and American festivals including the Algarve International Music Festival in Portugal, Denmark’s Tivoli and Vendsyssel Festivals. He has also performed with the Baltimore Chamber Orchestra, The Colombian National Symphony, the Harrisburg Symphony, to name a few. Since his critically acclaimed Lincoln Center debut in 1993, he has established himself as one of the most passionate and versatile artists of his generation. He has received unanimous praise from critics and audiences for his “captivating temperament”, “brilliant technique”, and “recalling the legendary violinists of the past”. Mr. Rathnam is extremely committed to the development of young musicians and his numerous students have been accepted at major conservatories throughout the United States and abroad. He is also the founder and artistic director of the West Branch International Music Festival and Academy.