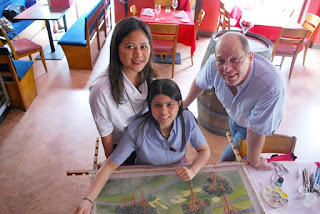 The Center for Possibilities Foundation (CFP) will be staging a back-to-back event at the RCBC Plaza in Makati on January 28 with an exhibit by Samantha Kaspar at 5:30 pm and  the Manila Symphony Orchestra at 7:00 pm.  The event is open to the public. 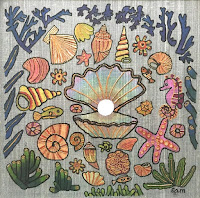 “Samantha” will consist of around 40 artworks, some on fabric to be used as fashion accessories and others on canvas for wall hangings.

“Samantha uses a wide variety of media for her work and we wanted to show the gamut of her abilities. She works primarily on piña silk using silk paints. She also uses acrylic paint on canvas sometimes,” explains Samantha’s mother, Mitzi.

“She has a consistent style with a lot of edges and lines, her artworks can be very linear. She also has this certain way of giving shapes to her images which aren’t necessarily realistic but are more cartoonish,” describes Samantha’s father, Martin.

While half-Swiss, Samantha always tries to tap into her Filipino roots, coming up with Filipino-themed artworks. She will be promoting some of that local culture when she heads to the Philippine Center in New York for the Fashion Arts Autism Benefit (FAAB) on April 7.

FAAB is meant to showcase the artistic talents of children with special needs. Samantha, diagnosed with Autism when she was one and a half years old, is one of eight artists chosen to present their paintings on piña silk to be translated into clothing by featured designers for the fashion show, Patis Tesoro and Anthony Legarda. Master weaver India Legaspi is credited for teaching the artists the technique of piña silk painting.

Samantha hopes to fund her trip with the proceeds of her auction.

The Manila Symphony Orchestra’s “Soundtracks and Symphonies” will be conducted by Prof. Arturo Molina and annotated by Jeffrey Solares. Included in their repertoire is a John Williams tribute as well as pieces from greats such as Beethoven, Mozart, and Bach.

The concert is for the benefit of Special Education (SPED) Centers that have been the focus of the Center for Possibilities’ recent efforts. To act as a venue for learning of indigent persons with special needs, each SPED Center is operated by a teacher trained in the SPED division of Reach International School.

The Sagada SPED Center has been up and running and will be enhanced with a series of livelihood and vocational programs that will be teaching skills for income-generating activities. “Caring for special kids is very taxing because it’s usually just a one-income household so we also need to help the parents improve their finances,” explains CFP founder, Dolores Cheng.

In Norzagaray, what they have right now is just the building itself. A fence, a water tank, and a playground are still needed. “We are also in the process of doing our due diligence by determining the number of special children in all the barangays relevant to Norzagaray. Next will be an orientation for all the parents within the community. We are subsequently planning for the provision of testing, diagnosis, and analysis for the children with special needs,” Cheng adds.

“Samantha” and “Soundtracks and Symphonies” will be on January 28, 2016, 5:30pm at the Carlos P. Auditorium of the RCBC Plaza, Makati.

Silly, Sassy Modern Fairy Tale "Once Upon a Mattress" Opens January 20 to 22 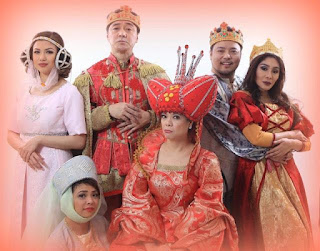 Due to an unhappy curse, King Sextimus is unable to speak. Meanwhile, his terror-of-a-wife, Queen Aggravain, has taken over control of the kingdom. Most importantly, in an attempt to keep Prince Dauntless single, she has decreed that only the princess that can pass her test may marry her son. Further, no one else in the kingdom may marry until Prince Dauntless does. Lady Larken and Sir Harry are extremely disturbed by this fact since Lady Larken is now pregnant with Sir Harry's baby. Luckily, Sir Harry is able to find an amazing princess, Winnifred the Woebegone. She instantly catches the attention of Prince Dauntless, and in the end, is able to pass the Queen's supposedly impassable sensitivity test. When the Queen still tries to prevent the Prince Dauntless from marrying, he tells her to 'shut up' which ends up breaking the curse on the king. Now able to speak, King Sextimus regains his rightful position as leader of the kingdom, and all is well.

Ephesus Teatron Group, Inc.  is all set to transport all of us to a magical world of musical theater as it proudly kicks off its first production for 2017 with “ONCE UPON A MATTRESS” at the Tanghalang Yaman Lahi Theater, Emilio Aguinaldo College located at 1221 Gen. Luna St. Ermita, Manila.
The schedule of performances are as follows: Jan. 20 – 22 (Fri. – Sun.) at 3:30 pm and 7:30 pm.

“Once Upon a Mattress” is from the Book by Jay Thompson, Marshall Barer and Dean Fuller. Music by Mary Rodgers. Lyrics by Marshall Barer. (Based on the story The Princess and the Pea by Hans Christian Andersen.)

The original 1959 Broadway production featured the debut of stage and TV personality Carol Burnett, and received two Tony Award nominations for Best Musical and Best Leading Actress. A 1960 London production was produced together with an original cast album recording. In 1996, Sarah Jessica Parker stepped into the leading role in a Broadway revival production together with Jane Krakowski which was nominated for the 1997 Tony Award for Best Revival of a Musical. An Off-Broadway production had a limited run last January 2016. Adaptations for television were aired in the US in 1964, 1972, and lastly in 2005.

For the Manila production, “Once Upon a Mattress” will be directed by Steven Conde who recently megged critically-acclaimed plays “Suicidal, Incorporated” and “Dog Sees God” for Twin Bill Theater.

“Once Upon a Mattress” is a silly, sassy, and a funny modern fairy tale musical with many amusing moments bursting at the seams featuring an assemblage of first-rate pros loaded with showbiz pizzazz and comic artistry from the Philippine theater industry.

Carla Guevara-Laforteza and Cara Barredo shall alternately play the role of Princess Winnifred the Woebegone. She is a feisty, outspoken, independent, strong, optimistic, and free-thinking princess from the swamp lands. She isn’t too good with manners. She wants to get married, but must go through the queen's unfair test as well. The Prince, naturally, falls madly in love with her.
Niño Alejandro will play the role of Prince Dauntless. A nice, not too smart, everyday type of young Prince who desperately wants to get married, but is prevented by his mother's strict tests that she gives to all potential candidates.

Hans Eckstein and Chino Veguillas shall alternately play the role of Sir Harry. He is the Queen’s Champion-in-Arms - the Lancelot of Knights - the macho, slightly egotistical, brave, romantic knight who decides to leave the kingdom to search for a princess, and finds Princess Winnifred in the swamp.  Easily jealous, but loves Lady Larken with all his heart. Harry cannot marry Lady Larken until Prince Dauntless has found a suitable bride.

Milay Guinid will essay the role of Queen Aggravain. The loud, talkative woman who really rules the country.  She is an overprotective, stubborn, sly Mom who is trying to keep her son, Prince Dauntless, from getting married.

Raymund Concepcion will play the role of King Sextimus. A kind, expressive, playful, and comedic character who is silent due to a curse placed upon him by a witch before the birth of Dauntless. He likes to chase girls through the corridors of the castle.  Needs good improv skills.

Arion Sanchez and Chino Veguillas will alternately play the role of Minstrel. The handsome narrator of the story, as well as in the musical story line. He becomes smitten with Lady Larken and tries to persuade her to flee to Normandy with him. He and the Jester join forces to stop the Queen's plans.
Steven Hotchkiss plays the role of the Jester. An energetic and peppy man who is the King's right-hand man and assists him with every endeavor. The Jester also plots with the Minstrel to spoil the Queen's plans.

Onyl Torres and Alex Dagalea shall alternately play the role of the Wizard. The egotistical, ex-performer who directly serves the Queen.  He is the Queen’s Henchman and thinks of all the Princess’ tests. He prides himself in his position and basically obeys all of the Queen’s orders.
Yanah Laurel and Jill Ita-as alternately essays the role of Lady Larken. She is the Queen’s Lady-in-Waiting but is put in charge of Princess Winnifred. She is madly in love with Sir Harry and desperately wants to marry him because she is pregnant with his baby. She tries to flee the Kingdom after having an argument with Sir Harry, but is convinced by Winnifred to reunite with him.
Sweet Samaniego- Buchanan plays the role of Princess No. 12. She is the first Princess that the audience sees who is performing the rounds of tests. Very eager, smart, thinks well on her feet – of course the Prince wants to marry her.

The Ladies-in-Waiting and Knights and are all waiting for the Prince to get married so that they can get married to each other.  These are character roles and are not just part of the chorus.
The Queen’s Ladies-in-waiting will be played by Sweet Samaniego- Buchanan, Ayam Eckstein, Tina Macaraeg, Jill Ita-as, Mica Fajardo, Meggy Katigbak, Nicole Herrera, and Ash Factor.
The knights will be played by Vincent Kevin Pajara, Josh Cabiladas, Gry Gimena, Edrei Tan, Arion Sanchez, and Alex Dagalea.