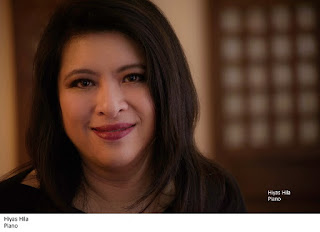 FILIPINA pianist Hiyas A. Hila performs with the Philippine Philharmonic Orchestra under the baton of Maestro Yoshikazu Fukumura in a matinee concert on June 11, 2017 at 4:00 p.m. at the Cultural Center of the Philippines’ Tanghalang Nicanor Abelardo (CCP Main Theater).


The program consists of Wolfgang Amadeus Mozart’s works, including the Overture from the opera Cosi fan tutte and Symphony No. 41 in C major, K. 551 “Jupiter”. Hiyas will render Mozart’s Piano Concerto No.23 in A major (K.488).


Hiyas earned her Doctor of Musical Arts degree in piano performance from the University of Minnesota School of Music, with Lydia Artymiw as her teacher, and her Bachelor and Master of Music degrees in piano performance, with Mack McCray as her mentor, from the San Francisco Conservatory of Music. A graduate of the Philippine High School for the Arts (PHSA), she attended the University of the Philippines College of Music for two years, where she was a consistent university scholar before she moved to the United States. Her previous piano teachers were Regalado Jose, Leonor Kilayko, Ariel Dechosa and Cecile Basilio-Roxas. She has played in masterclasses given by Blanca Uribe, Faina Luzshtak, Roman Rudnytsky, Russel Brandon, Reynaldo Reyes, Ariel Dechosa, Boris Slutsky, Julian Martin, and Albert Tiu.


Dr. Hila currently teaches piano, chamber music and piano ensemble at the East Bay Center for the Performing Arts in Richmond, California and at Saint Brigid Catholic School in San Francisco, California. She previously taught applied piano and class piano at the University of Minnesota in Minneapolis.