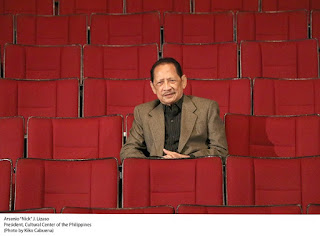 Meet the new president of CCP for 2017. The media had a chance to get to know him better last July 4, 2017 during a presscon with tour of the CCP premises for new media reps and updates. Itt was evident that he had a heart for the staff and the disadvantaged as he pointed out his priorities for the year. First on his list is to help raise the salary of the employees followed with providing them with better health benefits. The plight of the artists is nothing new to media and perhaps to most who belong to the same industry. They are motivated by passion regardless of compensation amount which oftentimes is not enough to provide for their daily needs.

By developing skills to world-class level and giving them proper exposure to the public, CCP has no doubt helped many artists despite limitations in providing higher wages. But this year CCP hopes to improve the compensation packages of these devoted and hard-working artists.by developing their facilities to entice the public to patronize their cultural performances more often.

Contrary to public perception, CCP is not for the rich alone. Several free entrance programs and lectures may not have been widely announced and circulated but they are available for students and the public in general, just visit their website. The only thing that they expect from their guests is to be considerate when it comes to noise, keep the surroundings clean, and avoid touching delicate displays or handle their property with care. Unfortunately this is something that not many students and some sectors of society are aware of, and they have to be told time and again. Sadly, theater audiences have to be told to turn off their noisy mobiles and stop talking and making noise during a performance. This is where education and breeding needs to be improved. I'm really hoping this reaches that particular, stubborn members of the audience. CCP is a haven for artists and the public to enjoy the arts, whether it be dancing, music, theater, exhibits or other forms of art.

Fortunately, CCP is developing their online presence to reach a wider crowd. Various Philippine regional cultures are now easier to share and learn more about with the development of CCP's digital presentations such as the CCP encyclopedia among other ongoing projects.

About the New CCP President:
THEATER actor, television and film director Arsenio “Nick” J. Lizaso was officially elected by the CCP Board of Trustees on June 13, 2017.  Lizaso has been with the CCP as member of the Board of Trustees since 2010.

Steeped in Western and Filipino literary classics, Nick Lizaso joined the Filipino film industry with a formidable background as a theater actor and director.  He was a recipient of the British Council Grant Attachment with the Nottingham Playhouse and the Royal Shakespeare Company (London and Stratford-on Avon), as well as a Fullbright-Hayes Travel Grant to the U.S. on theater arts, film and television.  A leading figure in the Directors Guild of the Philippines, he was President of the Guild from 1983 to 1985.

Born in Santa Maria, Bulacan, hometown of the King of Balagtasan Jose Corazon de Jesus, his maternal grandfather, Nick has played and continues to “play many parts”, using Shakespearean language, not only as an actor on stage and TV, but as an active educator and advocate of community engagement in the arts. His expertise in theater has been honed at the Nottingham Playhouse and the Royal Shakespeare Company (London and Stratford-on Avon) and as a Fullbright-Hayes scholarship grantee in the U.S. He is a recipient of several awards including Dangal ng Lipi Award in the field of Theater Arts (1999) from the City of Manila, Outstanding Achievement in the Field of Arts (1995), Patnubay ng Sining at Kalinangan (1995) from his hometown Sta. Maria, Bulacan.


In recent years, he has also represented the Philippines in international theater events as a member of the Executive Committee of the International University Theater Association or IUTA, a unique forum where teachers, practitioners, creators, scholars and theorists from over 1,000 universities and colleges based in 50 member countries share discoveries and discuss common concerns in the field of theater and performing arts. He is also a Vice-President of the Theater Education and Training Committee of the International Theater Institute-UNESCO.

Lizaso’s participation in international congresses and workshops affords him the opportunity “to share with others the unique perspective of the Asian, specifically Filipino creative artists involved in theater and the performing arts.” Like a silent unseen stage hand, Nick is doing his share of keeping Philippine theater alive by connecting it with other theaters of other countries, hoping to infuse it with fresh insights, new blood, new trends.

Nick’s other personal advocacy is teacher empowerment, organizing workshops focused on teacher development, infusing theater techniques to teaching to bring life to the classroom. He has conducted workshops in such places as Tagum City in Davao, Puerto Princesa City, Legaspi City. His most recent teacher development workshop was held for 5 days in November 2015 at the Rizal Memorial Colleges in Davao City.

In addition to the different outreach performances that the Philippine Philharmonic Orchestra has done over the years, Lizaso has supported the performances of the PPO in a cross section of Philippine society from medical institutions to the Greenhills business area.

Aside from community engagement activities, Lizaso also organized a free seminar about Mabini, entitled “The Last Filipino” at Club Filipino in Greenhills.

Posted by JR Bustamante at 7:30 PM