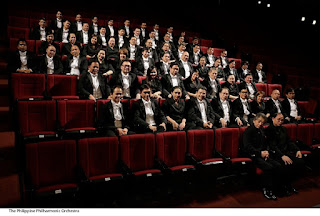 THE Philippine Philharmonic Orchestra (PPO) will hold its 35th Concert Season for 2017-2018 under the baton of Maestro Yoshikazu Fukumura at the Cultural Center of the Philippines’ Main Theater at 8:00pm.


Billed as “Romancing the Classics”, the season opens on September 15, 2017 with pianist Yury Shadrin as soloist. The programme includes G. Rossini’s Il Viaggio a Reims Overture, F. Liszt’s Piano Concerto No.1 in E-flat, and S. Rachmaninoff’s Symphony No.2 in E minor. As a soloist with orchestras, as well as in solo recitals, Russian-born pianist Yury Shadrin is widely known through South America, Asia, and the United States as a formidable young talent.


Noted cellist Ray Wang is the next soloist in the PPO’s concert on October 13. Programme consists of W.A. Mozart’s Symphony No. 32 in G, E. Lalo’s Cello Concerto in D minor, and I. Stravinsky’s Petrushka (Complete Ballet). Ray Wang has performed throughout the musical centers and festivals in China, Hong Kong, Taiwan and Macau. He is a founding member of the Hong Kong Virtuosi, Canzone Trio and New Art String Quartet in Hong Kong


Filipino saxophonist Tots Tolentino performs on November 17 with the PPO under the baton of Filipino conductor Gerard Salonga. The program features G. Gershwin’s Porgy & Bess, J. Williams’ Catch me if you can escapades and A. Dvorak’s Symphony No. 9 in E minor “From the New World”. Tots Tolentino is said to be the most distinct and influential sax sound in the Philippines today.  He currently heads the Jazz Studies program at the University of Santo Tomas, Manila, spreading the gospel of jazz to today’s youth.


Come December 15, Uruguayan guitarist Eduardo Fernández performs with the PPO. The program includes C. Debussy’s La Mer, J. Rodrigo’s Fantasia para un Gentilhombre, M. Ravel’s Valses nobles et sentimentales and Bolero.  Recognized as one of today’s leading guitarists, Eduardo Fernández is active as a teacher, as well as being very much in demand for masterclasses and lectures all around the world. He has written a major book on guitar technique, a book on Bach’s lute music, and many articles in leading guitar publications.


Welcoming the New Year is Filipino trombone player Ricson Poonin as he performs with the PPO under the baton of Maestro Herminigildo Ranera on January 19, 2018.  Program is comprised of M.P.Maramba OSB’s Symphony Ode ''La Naval'', F. David’s Trombone Concertino in E-flat, and P. Tchaikovsky’s Symphony No.6 in B minor ''Pathetique''.  A member of the PPO, Ricson earned his Master of Music in trombone performance and received the James Winship Lewis Memorial Prize Performance Award at the Peabody Conservatory. He actively performs as the principal trombonist of the Peabody Concert Orchestra and the co-principal trombonist of the Peabody Symphony Orchestra.


Greek conductor Stefanos Tsialis will lead the Orchestra on February 16 with an exciting program consisting of N. Skalkottas’ 5 Greek Dances, B. Smetana’s Sarka from ''My Country'' and D. Shostakovich’s Symphony No.5.  Stefanos Tsialis has been the chief conductor and artistic director of the Athens State Orchestra since 2014. He has worked with over 70 orchestras in many EU countries as well as in Canada, Cuba, Russia, South Africa, Turkey and the USA.


Filipino pianists Raul Sunico and Ingrid Santamaria perform with PPO under the helm of Maestro Yoshikazu Fukumura on March 16. The program includes T. Takemitsu’s Requiem for String Orchestra, F. Mendelssohn’s Concerto for 2 Pianos and Orchestra in A-flat and F. Schubert’s Symphony No.9 in C ''The Great''.  Sunico is one of the 1986 Outstanding Young Men Awardees for Arts and Music, and he has performed with many of the most prestigious Orchestras in the world. He has earned international recognition not only as a concert pianist, but also as a composer-arranger and promoter in the world of Philippine music.  Ingrid was a regular piano soloist in Concert at the Park, a nationally televised cultural program broadcast from Manila’s Rizal Park, since its initial concert in 1978 up to 1986. She received various honors, among them, the Hall of Fame award from the Performing Arts League in Crestwood, Florida, USA; "Who is Who" in Asia documentary feature by NHK Television, Japan; "One of the 100 Most Notable Cebuanos of the Century" award; and from the French government; Chevalier, Ordre des Palmas Academiques; and Chevalier, Ordre du Merite Nationale.