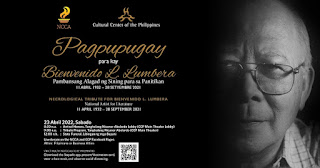 THE Cultural Center of the Philippines and the National Commission for Culture and the Arts lead the nations to pay homage to the late National Artist Bienvenido Lumbera in a necrological tribute slated on April 23, 2022.

The necrological tributes will start with Arrival of Honors at 8:30am at the CCP Front Lawn, followed by the program at 9am at the Tanghalang Nicanor Abelardo (CCP Main Theater). State funeral follows at 12nn, at the Libingan ng mga Bayani.

National Artist for Literature Lumbera passed away on September 28, 2021, at the age of 89.

He was conferred the Order of the National Artists, the highest national recognition given to Filipino individuals, for his significant contributions and achievements in Philippine literature, in 2006.

Acknowledged as one of the pillars in contemporary literature in the Philippines, Lumbera introduced to Tagalog literature the Bagay poetry, a landmark aesthetic tendency that changed the vernacular poetic tradition.

Most of CCP’s landmark productions are those touched by National Artist Lumbera’s genius, working as librettist in various theatrical works which premiered in the center’s theaters and became the standards of excellence in performing arts. Some notable works were Tales of Manuvu, Rama Hari, and Noli Me Tangere, which were performed by CCP resident companies Ballet Manila and Tanghalang Pilipino, as well as Hibik at Himagsik nina Victoria Laktaw.

He received several accolades, most notably the Carlos Palanca Award for Literature in 1975, the Magsaysay Award in 1993, the Philippine Centennial Literary Prize for Drama in 1998, and the CCP Centennial Honors for the Arts in 1999. He also won several from Manila Critics Circle and National Book Awards.

The public is invited to pay tribute to the great literary master, following health and safety guidelines. For those attending the necrological tribute, kindly read the CCP protocols for Alert Level 1: https://bit.ly/ccpnewnormalprotocol.