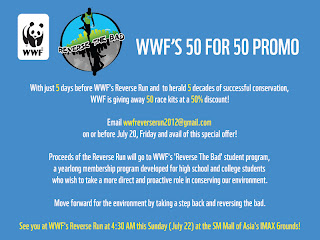 With just 5 days before WWF's Reverse Run and to herald 5 decades of successful conservation, WWF is giving away 50 race kits at a 50% discount!

Email wwfreverserun2012@gmail.com on or before July 20, Friday and avail of this special offer!

From today until July 20, registration fees will be P200 for the 3K and 6K race courses and P300 for the 12K race course. Limited-edition WWF singlets included!

Proceeds of the Reverse Run will go to WWF's 'Reverse The Bad' student program, a yearlong membership program developed for high school and college students who wish to take a more direct and proactive role in conserving our environment.

Move forward for the environment by taking a step back and reversing the bad.

Posted by JR Bustamante at 8:16 PM No comments:

Earth Hour and Beyond: What Should I Do Now? 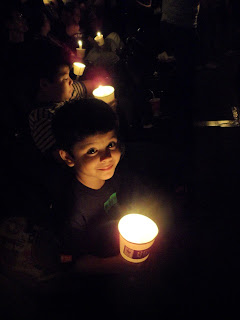 A beautiful sea of candle lights lit up the Ayala Triangle Garden in Makati City last March 31, 2012 with shadows of smiling faces appearing over the darkness. People united and took pride in the effort to create global awareness for the plight of Mother Earth.  There were song and dance numbers as well as random pledge-making among the audience before the anticipated light switch-off moment was to happen from 8:30 until 9:30 pm..  Celebrities like Chris Tiu attended the event to lend their crowd-drawing power for the cause.  The feeling of the night was somewhat close to a New Year celebration where a count-down for Earth Hour was eagerly anticipated but instead of fireworks, the crowd was looking forward to darkness.  Who would have guessed that darkness could be a good thing? 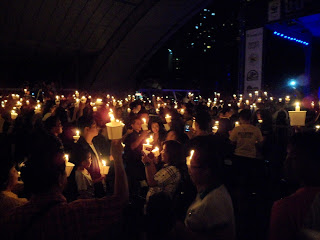 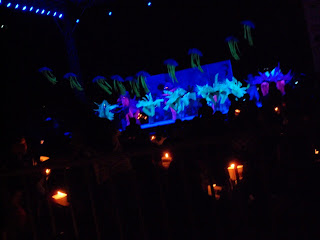 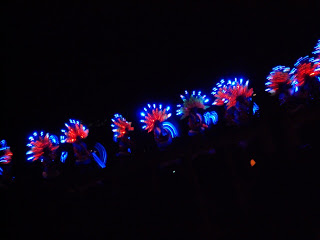 Performances from Bailes De Luces, Caracol, and El Gamma Penumbra entertained the audience with outstanding energy and confidence. Minutes before the switch-on, WWF-Philippines Partners announced their participation in the I WILL IF YOU WILL campaign by sharing their pledge.
The I WILL IF YOU WILL campaign aims to empower people by asking them to share a personal dare with the world. It poses the question -- what are you willing to do to save the planet? -  and centers around providing a social contract between two parties. It connects one person, business or organization to a ‘promise’ and their friends, family customers or members to a challenge – uniting them behind the common goal of creating a positive environmental outcome.
Famous faces around the world are speaking out to encourage participation and support for Earth Hour. Pledges are coming in from a plethora of groups and as an open sourced campaign, Earth Hour uses social media to connect a global community of people inspired to change the world they live in.
Cebu City’s Plaza Independencia was the chief switch-off site for the Visayas. A festive street parade led by local Sinulog Dancers started at Fuente Osmeña Circle from 5:30 PM onwards. The Cebu switch-off featured a candle lighting ceremony capped off by the release of biodegradable sky lanterns. Cebu’s event was held in cooperation with the Aboitiz Group and the Cebu City Government.
SM Davao was the main switch-off site for Mindanao. WWF-Philippines National Ambassador Marc Nelson hosted the switch-off, which featured a tribal-themed parade around SM Davao at 6:30 PM. Black-light and fire-dancers entertained the crowd with specialized routines when the city plunges into darkness. The Davao event was in collaboration with SM Supermalls, the Green Alliance and the Davao City Government. 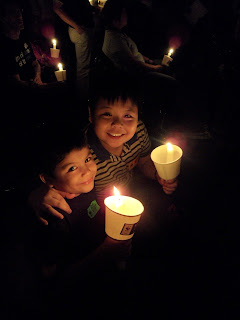 Earth Hour is one of the solutions that we can use to battle climate change, among other environmental problems. With this in mind, Makati City Mayor Hon. Jejomar Erwin Binay, Jr. welcomed the guests and introduced a short message from the President of the Republic of the Philippines, Benigno Aquino III.  WWF Philippines Vice Chairman and CEO, Jose Ma. Lorenzo Tan talked about climate change and rallied people to be part of the solution.
Andy Ridley gave the keynote speech followed by the Earth Hour official video and a message from heads of WWF International leaders – Jim Leape, WWF International Director General and Yolanda Kakabadse, WWF International President.
“I want to say thank you to all of you here in Mania and across the Philippines who are part of this global event. Earth Hour by itself is an important statement of concern about the future of the planet. It also should be just the beginning. So I hope when you go home you will recommit yourself to making changes in the way you live that can help us all sustain life on earth. Thank you for being part of Earth Hour 2012,” said Mr. Leape in his message to the Filipinos.
Everyone was asked to pledge for the planet by having a greener lifestyle and by joining hundreds of millions of people across the globe in calling for action on climate change and celebrating one’s commitment for the planet not just for that night but beyond the Earth Hour.
The ceremonial switch-off was led by Earth Hour Co-Founder Andy Ridley, WWF Vice-Chairman and CEO Mr. Jose Ma. Lorenzo Tan, Makati City Mayor Hon. Jejomar Erwin Binay Jr., Ayala Land Inc. President Mr. Antonio Aquino, DOE Undersecretary Ms. Loreta Ayson, Climate Change Commission Commissioner Naderev Saño, and MACEA President Mr. David Balangue.
Now in its fifth year, Earth Hour Philippines continues to grow. Current public sector partners include the Climate Change Commission, Department of Energy, Department of Environment and Natural Resources, Philippine Information Agency, Department of Public Works and Highways, Department of Science and Technology, Department of Agriculture, Department of Foreign Affairs, Department of National Defense, Department of Transportation and Communications, National Economic Development Authority, Department of Budget Management, Department of Trade and Industry, Department of Education, the Metro Manila Development Authority, League of Municipalities, League of Cities and League of Provinces of the Philippines.
Philippine Media Champions include TV5, ABS-CBN, GMA-7, CLTV-36, Discovery Channel, Knowledge Channel, ZOE TV, Global News Network, Philippine Star, BusinessWorld, BusinessMirror, Philippine Daily Inquirer Online, Aftercall Magazine, Philippines Graphic, Radyo Veritas, DZIQ, DZAR, Globaltronics, QCreativs, Photoworld Manila, ASK and Illuminati Philippines.
Corporate partners include the Yuchengco Group of Companies, Arthaland, McDonald's, Big Chill, Tully's Coffee, Globe Telecommunications, Smart Communications, Primer Group of Companies, Core, York, Victory Liner, Aboitiz Group of Companies, Lopez Group of Companies, Philippine Business for Social Progress, Ayala Land, SM Supermalls, Victory Liner Incorporated, 2GoTravel, Canon Marketing Philippines, Campaigns and Grey, Leo Burnett Manila, the Makati Shangri-La Hotel plus Hyatt Hotel and Casino Manila.
The list of allies grows longer each day.
“More than anything, Earth Hour is a celebration of hope. When our planet plunges into darkness, we can look to the stars and dream of what can be. When the lights switch back on though - our real work begins,” concludes Ibay.
These scenes may have been replicated in other major cities around the world but when the lights are turned back on, what happens next? How do we keep the feeling alive, much longer than just a hour?
WWF Phil CEO, Mr. Jose Ma. Lorenzo Tan, sums up what Filipinos can do beyond Earth Hour.
“What are the things we forget? . . . is that we are a democracy. The art of democracy is participation.  If you look in the US, the first one to respond to Hurricane Katrina is the private sector not FEMA.  So that is the point I am trying to make here.  Sure, the governent has the opportunity to influence politics, but politics takes years like planting trees. Whereas the private sector can do something quickly and within one year they can make a difference, not just by saving power but by keeping communities and economies viable . . .such as how they put up their plant or how they annex water.  No company can operate without water and there are some companies who have actually made investments in improving watershed management that not only benefits the company but also the community. For me, the challenge here is to create waves of reaction, not just point to government and ask what are you doing now. The opportunity really here is to point to yourself and ask: what am I doing?”
Posted by JR Bustamante at 11:02 AM No comments: 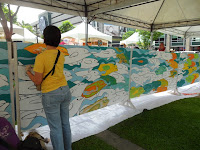 Makati City, Philippines--- The World Wide Fund for Nature (WWF) Philippines held its first Mural Painting Marathon on February 18, 2012 at the Glorietta Dolphin Park where participants pledged in support of the environment and had their chance to make a bold and colorful mark.  They registered as an environment supporter, assigned a number then started painting an image of one of the many dolphins outlined by mural artist and dolphin crusader, AG Saño, as an expression of their concern. These four walled paintings of dolphins, about 200 feet in length, will be auctioned after wherein  the proceeds will go to the WWF Palawan project. 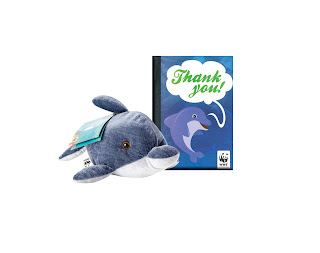 The event was another effort of WWF-Philippines to provide creative ways for everyone—families, youngsters and peers—to demonstrate their support for a living planet and at the same time raise awareness about local endangered species.
The Mural Painting Marathon was staged for the benefit of WWF-Philippines’ Adoption Program. For a one time donation of P3,000, you can symbolically adopt a panda or a dolphin stuffed toy that comes with a species information card and an adoption certificate. 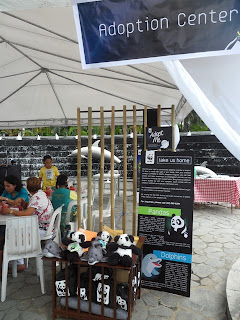 The panda was picked to represent WWF’s logo and spread the knowledge that it is among the world’s most threatened animals, while the dolphin was chosen to highlight conservation work in the Philippines, specifically in Malampaya in Palawan. The Malampaya Sound hosts the critically endangered Irrawaddy dolphins.
The funds raised from the organization’s Adoption Program will help protect local endangered animals and their habitats.
A WWF Adoption Center was set up for the Adoption Program, along with other booths for face painting, henna tattooing, anime painting and other surprises from event sponsors like Drypers Wee Wee DRY Diapers, Big Chill, Tully’s Coffee, Healthway, 2GO, Virtuoso by Boysen, The Fortnightly, BC Magazine, Spark and Glorietta Ayala Center all gathered together in one venue to make an artistic statement for mother nature.
While the mural painters were busy designing their designated dolphin, a program hosted by WWF Ambassadors Marc Nelson and Rovilson Fernandez was running simultaneously to entertain them and the guests.
The program featured musical and spoken word performances from Bigkas Pilipinas’ Kooky Tuason, Marty Tengco, Rommel Pidazo of Ilaya, Opaline Santos and live acoustic sessions with Charms Tianzon, Lee Grane, Swissy and Maegan Aguilar.
The mural painting participants likewise took their advocacy a step further by signing the Commitment Wall panel at the right end of the mural. Signing the wall is a pledge to minimize carbon footprint, and to not patronize activities that harm nature and its inhabitants, or cause ecological imbalance. 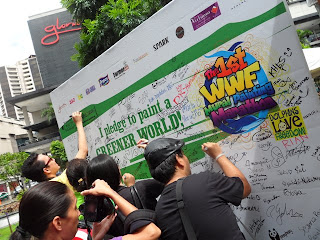 The mural wall will continue to be exhibited at Glorietta Dolphin Park until February 26, 2012 and will be auctioned off for a minimal starting bid of P1,000.
This event was co-sponsored by: Drypers Wee Wee Dry Diapers of SCA Hygiene, Big Chill, Tully’s Coffee, 2GO, Virtuoso by Boysen, The Fortnightly, BC Magazine, Spark and Glorietta Ayala Center, Shutterhedge Eco Bags, Right Click Photobooth, Healthway Medical Philippines, Silverworks, EastWest Bank – Fort Branch, Plato Wraps, and Farmer John Premium Potato Chips.
About WWF-Philippines
WWF-Philippines has been working as a national organization of the WWF network since 1997. It began as an organization focused almost entirely on species work and conservation science. Today, WWF-Philippines has 13 project sites across the country and is at the cutting edge of an expanding spectrum which includes climate change policy, adaptation and mitigation drives; water and coastal resource management for sustainable food security; renewable energy technologies, and environmental education.
Posted by JR Bustamante at 10:51 AM No comments: