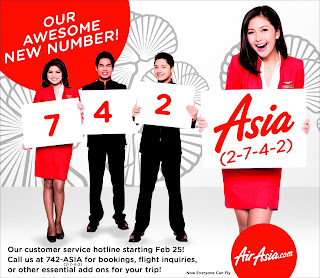 Great News for travelers availing of AirAsia airline online promos , no need to risk paying online when you can go to the nearest 7-eleven stores to pay your bill.  And with a hotline number 742ASIA or 742.27.42 effective on February 25, you can be certain of the success of your transaction.

“To provide optimum customer care service for our guest, AirAsia is launching two new significant innovations. We have a new customer hotline that is easy to remember and we are also rolling out our cash payment partner with 7-Eleven store for our passengers who want to avail of our online promo and other privileges but would like to pay in cash instead of using their credit cards,” AirAsia Inc. Commercial head Freddy Herrera said.

AirAsia’s payment partner service provides the convenience of using cash when paying for AirAsia promo fares and other online purchases at www.airasia.com.

“Filipinos will embrace this new concept of paying cash for airline tickets via our payment partners option because of its simplicity and convenience,” Herrera added.

The payment partner service covers all Philippines’ AirAsia flights from its hub in Clark International Airport to Taipei, Singapore, Hong Kong and Kuala Lumpur including domestic flights to Davao and Kalibo (Boracay).

“We are expanding our payment partners service to include other outlets in the coming weeks so that more and more people will benefit from AirAsia’s awesome low fares and extensive route network covering 80 destinations in 20 countries,” Herrera said.

About AirAsia Inc.
As part of its commitment to develop tourism and transportation outside Metro Manila, AirAsia Inc. set up its hub in Clark, Pampanga in 2011. In the same year, Filipinos welcomed the airline’s brand new Airbus A320s operated by an all-Filipino crew, signifying greater opportunities for travel, leisure and tourism industries in the country.

AirAsia Inc. is a 60-40 joint venture between Filipino investors Antonio O. Cojuangco, Michael L. Romero and Marianne B. Hontiveros, and Malaysia’s AirAsia International Ltd., a wholly-owned subsidiary of AirAsia Berhad, which has won SkyTrax’s best low cost airline for four consecutive years. (Skytrax is the world’s largest airline and airport review site.)
Posted by JR B at 10:13 AM No comments: