Guingona first essayed the role in the Asian premiere of Red at the College of Saint Benilde in February 2013. He also directed the play. For his work in Red, he received the 2013 ALIW Award for Best stage Actor and Best Director.

Red is about the abstract expressionist painter Mark Rothko who was commissioned, for what might have been the equivalent of the Sistine Chapel commission, to paint a series of murals for the cutting edge Seagram Building on Park Avenue. But after completing the works, he mysteriously decides to keep the paintings and returns every penny of the advance. Years later, the artist donates the works to the Tate Gallery in London and on the very day it arrives at the gallery, he commits suicide.

The play introduces a fictitious assistant who engages Rothko in arguments and conversations that ultimately make us understand why Rothko might decide to withdraw his work from the commission.

The original production of Red was premiered in London in 2009 and then staged in Broadway the following year. It had Alfred Molina in the leading role. Red won six Tony Awards and recognition in the Drama Desk Awards and Drama League Awards.

In Manila, “Red” is presented by Actor’s Actors’ The Necessary Theatre. Joaquin Pedro Valdes takes on the role of Rothko’s assistant.

The Asian premiere of Red in Manila received rave reviews.

“Guingona was consistently excellent as Rothko. The charismatic Valdes was a perfect foil, his character being both knowledgeable and naïve. “Red” may well be one of the most important plays staged this year.”

Cora Llamas of Interaksyon TV 5 said: “And two actors (Bart Guingona and Joaquin Valdes) who unleash upon each other line after line of brilliant dialogue that makes the audience re‐examine their perspectives on art, and the passion (if any) that they bring to life. There was good reason why Red won the Tony Award for Best Play in 2010. It reminds you that the play is the thing—the written word incarnated in complex characters who are made flesh-and-blood by actors who can give them the depth and layering that they require.”

For details, contact the CCP Performing Arts Division at 832-1125 or visit CCP website (www.culturalcenter.gov.ph).
Posted by JR B at 9:10 PM No comments:

Email ThisBlogThis!Share to TwitterShare to FacebookShare to Pinterest
Labels: ccp, Cultural Center of the Philippines, red 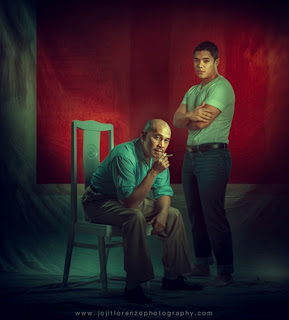