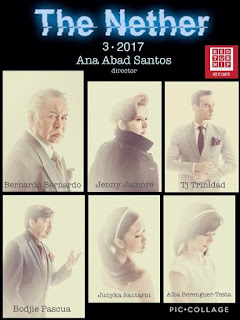 Press Announcement:
Fresh off the critical success of their last outing, the family comedy-drama Tribes, Red Turnip Theater is ready to take audiences into a different theater experience with the sci-fi thriller THE NETHER.


Ever since making their debut four years ago, Red Turnip has already made quite the dent in the local theater scene. By sticking to their vision of producing contemporary straight plays, this young company has almost single-handedly paved the way for the straight play to find equal footing in a landscape formerly dominated by the musical. Younger companies have sprouted and followed suit and there are now more text-driven plays getting produced than ever before. Each of the Red Turnip’s eight productions has gone on to top critics’ lists and garner awards and nominations from both the Aliw and Gawad Buhay Awards, making this company the go-to for outstanding plays that both entertain and move.


Their Fourth Season’s grand finale is THE NETHER, a sci-fi crime drama about the dilemmas of living in a virtual world. Written by Jennifer Haley and winner of the 2012 Susan Smith Blackburn Prize, this thrilling play explores the ethical questions and moral consequences of living out one’s hidden desires and fantasies. Set in the not-so-distant future, this haunting thriller made its West End and Off-Broadway debut back in 2015 and has been produced across the U.S. and Europe.

THE NETHER is a play for our times. It is relevant; it is provocative. In the play, life is spent more and more in The Nether, a virtual paradise so interactive that it engages all the senses--a tempting haven to retreat from a bleak world. But the main conflict begs the question: In a computer-generated space, is there no room for ethics and morality? THE NETHER isn’t just about Virtual Reality, but Reality itself.

Jenny Jamora (Cock, The Vagina Monologues, A Little Night Music) returns to the Red Turnip stage to take on the lead role of Detective Morris, an investigator of The Nether’s online offerings.


With a stellar cast and creative team, this Red Turnip production is sure to electrify with its one-of-a-kind story and give audiences the complete theatrical experience this groundbreaking new company is known for.


THE NETHER opens March 10 and runs all weekends until April 9. Tickets at www.ticketworld.com.ph or www.redturnip.com.ph.