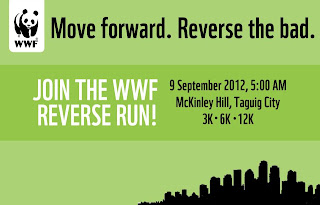 Take a step back then move forward for the environment by joining the WWF Reverse Run!

Originally slated for July 22 at the SM Mall of Asia, the run organized by the World Wide Fund for Nature Philippines (WWF-Philippines) was postponed due to Typhoon Ferdie.

“We apologize for any inconvenience the postponement may have caused. Your safety is our top priority. The weather conditions compelled us to reschedule the fun run to another date and venue,” said Mayj Tolentino, WWF-Philippines’ Individual Donor Program Manager.

WWF-Philippines is pleased to announce that the Reverse Run will take place at 5:00 AM on 9 September 2012 at the Venice Piazza Grounds, McKinley Hill, Taguig City! Race distances are 3K, 6K and 12K.

WWF's Reverse Run is unique because runners will backpedal through the course for a few meters before running their respective race distances. Running in reverse symbolizes each runner’s commitment to reverse the accelerating degradation of our environment.

Participants can sign up at the following registration sites: Chris Sports (Glorietta 3, SM Mall of Asia, SM Manila and Fitness and Athletics at the Bonifacio Global City) and Skechers (Festival Mall, Market Market and TriNoMa).

They can also register online at: http://event.ayojak.com.ph/event/wwf-reverse-run-2012-reverse-the-bad.

Fly Responsibly with the Bright Skies for Every Juan Programme

Here's a press release that should appeal to green travelers out there . . .
Every time we fly, our aircraft burns fuel and emit carbon into the atmosphere. The release of greenhouse gases contribute to climate change, which is now the most serious and pervasive threat to humanity and nature.

What if airline passengers have the chance to offset their carbon footprint whenever they fly?

The World Wide Fund for Nature Philippines (WWF-Philippines) and Cebu Pacific Air, Inc. (CEB) invite travelers to fly responsibly by donating to the Bright Skies for Every Juan programme when booking their trips online at www.cebupacificair.com. The CEB website generates a donation amount that corresponds to the distance of their flight and the estimated amount of carbon dioxide emitted.

Through this programme, airline passengers have the opportunity to minimize the ecological impacts of air travel and help protect the Philippines’ Great Reefs, the Apo Reef in Occidental Mindoro and Tubbataha Reef in Palawan, which together generate enough food and livelihood for some 40 million Filipinos each year. 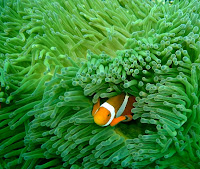 The inclusion of the Tubbataha Reefs of Puerto Princesa City has dramatically enhanced the breadth of the program.

“We want to provide an innovative opportunity for our passengers to contribute to a climate adaptation program to fight global warming,” says Lance Gokongwei, CEO and President of CEB. “Since airlines contribute their own carbon footprint to the atmosphere, Bright Skies for Every Juan, our climate adaptation program, gives CEB the chance to do something concrete for the environment.”

WWF-Philippines Vice-Chair and CEO Jose Ma. Lorenzo Tan says, “At the end of the day, the most crucial decisions - that to consciously do what we can to reduce our impacts - lie in our own hands. We have a shared responsibility to minimize our footprint not just when we fly – but in whatever we do.” 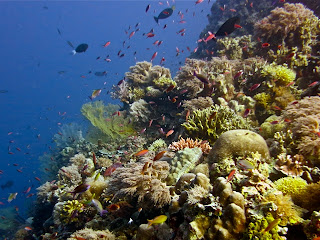 Formed from the eruption of undersea volcanoes nearly 15 million years ago, Tubbataha or ‘long reef’ in the Samal tongue is located in the central Sulu Sea, about 160 kilometers southeast of Puerto Princesa City in Palawan.

The Tubbataha Reefs host over 600 kinds of fish that frolic amongst 396 types of soft and hard coral. Other denizens include 14 species of sharks including the ferocious tiger shark; 12 species of dolphins and whales; a nesting population of endangered hawksbill and green sea turtles; and over 100 species of birds, including rare migratory birds.

“Few reefs come close to the biological productivity of Tubbataha,” explains WWF-Philippines Vice-Chair and CEO Lory Tan. “Through a well thought-out plan implemented by the Tubbataha Protected Area Management Board and the Tubbataha Management Office, fish biomass has remained stable for over a decade. Today, Tubbataha’s fish biomass stands at over 200-tonnes per square kilometer. Incredibly, this is five times greater than the productivity of a typical healthy reef.” 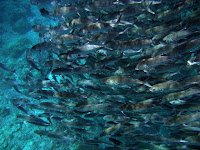 On the other hand, Apo Reef is the largest in Asia and is situated 15 nautical miles west of Sablayan in Occidental Mindoro. It is home to almost 200 species of soft and hard coral, 385 species of fish plus charismatic undersea giants like thresher and hammerhead sharks, manta rays, sperm whales, dolphins and sea turtles.

Through the DENR and the local government of Occidental Mindoro, WWF helped secure the future of Apo Reef through its proclamation as a ‘no-fishing’ zone in 2007. Overall coral growth dwindled to less than 33% in 1994 but has steadily improved. In 2006, an assessment cited growth at 52% and rising.

Through the generosity of thousands of Cebu Pacific airline passengers, the Apo and Tubbataha Reefs will enjoy better protection through improved local government alliances and enforcement efforts, financial sustainability schemes and responsible ecotourism.

In the face of economic and environmental fragility, the importance of the Apo and Tubbataha Reefs, as well as the wealth beneath and above their waters have never been more critical. 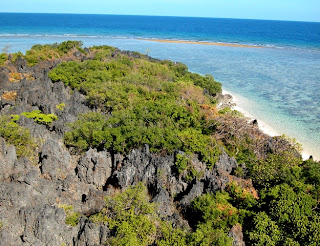 WWF-Philippines and CEB encourage airline passengers to fly responsibly and help sustain the excellent health of the country’s great reefs.
Posted by JR B at 8:42 AM No comments: